By continuing use this site, you agree to the Terms & Conditions and our use of cookies.
Top Category


Harmonica sets are a good way to save and bundle once you know which model you like.

In the history of the harmonica blues there is a before and after Little Walter. An artist who is a pivotal between two ways of blowing the ...

How to Buy the Right Harmonica – What Really Matters?

Are you looking to purchase the perfect harmonica? Do you already have a budget in mind? Which harmonica brand is better? More importantly do you ...

Looking for a cool gift for Halloween? why not check our limited selection of creepy harmonicas?

For the first time in 20 years Seydel harmonicas that are hand made in Germany announces a general price increase.

What is the best harmonica for beginners? In this article we'll help you select your first harmonica.

What Harmonica keys do you need?

Harmonicas come in a wide variety of keys. Depending on your level and what style of music you're playing you might only need one key. Let's see ...

what harmonica to buy? Buying a harmonica really depends on several factors and here we're going to help you make the right decision So let's ...

The Hohner echo models like the Echo 32 – 2309 harmonica the Hohner Echo 48 – 2509 harmonica and the double sided Echo models 54/64 and 56/96 harmonicas are classic models that have been manufactured by Hohner for almost a hundred years!
This specific type of harmonica is called a tremolo harmonica. It is very popular all around the world to play simple Folk melodies.
These models are frequently called double-row harmonicas. A lot of people play them by ear not necessarily fully understanding what is going on under the hood!
The bottom hole is tuned to 440 hz and the top hole is slightly detained (down) so that when you blow or draw 2 notes at the same time you get a tremolo effect very close to the lovely sound of an accordion.
The note layout is close to a diatonic model but not exactly the same either.

Here is a peak at one of the most famous Hohner Echo harmonica, the Echo 48 reference 2509/48.

The notes in bold are similar on both harmonicas:

As you can see the blow notes are repeating a C major chord C, E, G all the way through.
We could consider that the centre note is hole 3 below, holes 1 and 2 being just a lower extension of the musical range. Holes 3 to 6 use a solo tuning that is the same as what we find on a 10 hole diatonic harmonica going from 4 to 7 or a chromatic harmonica going from 1 to 4 then 5 to 8 and so on.

The Echo is tuned in C and even though it used to be made in multiple keys it only comes in C now. 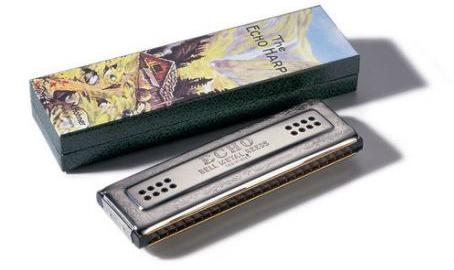 The Echo double sided harmonica models have a maple comb that is lacquered, brass reeds and reed plates and stainless steel covers. Other tremolo models from Seydel, Harmo and Suzuki use a plastic comb and stainless steel reeds or phosphor bronze reeds. The numbering system of the model can be sometimes confusing. Tremolo models usually come in 21 and 24 notes but can be labelled 48 in reference to the number of holes – since each note is doubled to create the tremolo effect.

Overall these models are very diatonic since you can only access the notes from the C major scale and its modes. Contrary to a 10 hole diatonic harmonica, because of the nature of the reeds and the tremolo system it is impossible to bend those notes to add passing tones or extend the number of notes available on this type of harmonica. Most harmonica players will use it to play either in A natural minor ABCDEFGA or C major CDEFGAB.
Seydel, Suzuki and Harmo make tremolo models that are also available in multiple keys such as the Sailor 48, Skydiver tremolo harmonica, SU-21H
The most common keys are C, D, G and A. Like standard diatonic harmonicas some models are actually available in all 12 keys and some even come in harmonic minor tuning to open up to oriental and classical songs.

The potential of this type of harmonica is limited but the very sweet and soft accordion-like sound and easy access to a full diatonic scale is what makes the echo tremolo harmonica a Favourite to play Folk music from Germany, China, Japan, The United States, Ireland and so on.